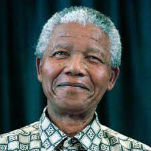 Nelson Rolihlahla Mandela (born Rolihlahla Mandela, 18 July 1918 – 5 December 2013) was a South African anti-apartheid revolutionary, political leader, and philanthropist who served as the first president of South Africa from 1994 to 1999. He was the country’s first black head of state and the first elected in a fully representative democratic election. His government focused on dismantling the legacy of apartheid by tackling institutionalised racism and fostering racial reconciliation. (Wikipedia)

“I learned that courage was not the absence of fear, but the triumph over it. The brave man is not he who does not feel afraid, but he who conquers that fear.” – Nelson Mandela

Let’s take this message into the new week DOMinators! Push past dangers of the mind like fear, and do your best to make the most out of every situation.