Abbott Elementary is the TV show we didn’t know we needed, especially when it comes to looking at how schools serve Black and Brown children. While the show, created by Quinta Brunson, mimics the everyday teaching experience in underfunded, poorly managed public schools in America, it also highlights the beautiful demonstrations of social-emotional learning (SEL).

According to the Collaborative for Academic, Social, and Emotional Learning (CASEL), SEL is how people manage emotions and achieve personal and collective goals, feel and show empathy for others, establish and maintain supportive relationships and make responsible and caring decisions.

No matter if we’re laughing at, cheering, or nodding in agreement during an episode, we’ve been touched by Brunson’s perky, glass-is-half-full second-grade teacher, Janine Teagues.

The fictional Teagues, like so many Black teachers in her situation, are motivated, empathetic, compassionate problem solvers who battle challenges—like not having enough school supplies—with creative gumption. Teagues not only models SEL, but the Philadelphia native is Black SEL in action.

In the first episode, while reviewing homework, Teagues compliments a student for having “great sentence” structure, even after the girl wrote that her favorite movie was American Gangster, and her favorite actor was Frank Lucas. While this choice would raise eyebrows for most teachers, Teagues understands the importance of affirming students and accurately perceiving the child’s environment. But Teagues doesn’t ignore it. Instead, she reminds herself to check in with the parent (again) about the viewing options at home.

Teagues talks about being a product of the Philly school system and jokingly unpacks her childhood experience in later episodes. She is self-aware, knowing how entertainment can influence a child and their cognitive behaviors, based on what they’ve seen, heard, and experienced.

In the same episode, it’s clear there’s a facility issue when a student urinates on the classroom rug instead of going to the non-working bathroom. Teagues could’ve yelled and lost her cool, but instead she was determined to speak with the principal, Ava Coleman (played brilliantly by Janelle James) about the budget and securing items, especially a new rug, for her classroom. This is self-management at work.

Her students are at the top of her priority list. And Teagues’ responsible decision-making skills allow her to identify the problem, analyze the situation and provide a solution, even if it colors a tiny bit outside of the lines.

Throughout the season Teagues displays social awareness for the teachers and students. Once, when a student mentioned being scared to walk down the dark hallway, Teagues grabbed a ladder to fix the lighting issue herself. This may be comic relief to some, but it’s a testament to how Teagues is always ready to step in—even if her unwanted assistance ends up with hilarious (and disastrous) results.

As one of two original teachers who survived their first year at Abbott (they started with 20) Teagues finds common ground with Jacob Hill, the white sixth-grade history teacher. She calls their connection and dedication to stick it out “trauma bonding.”

Teagues’ relationship skills are also at play with Gregory Eddie (played by Tyler James Williams), a substitute teacher who at first, doesn’t seem vested in his students. And even though Teagues’ can-do spirit annoys veteran kindergarten teacher Barbara Howard (played by Sheryl Lee Ralph), when it’s time to make a friendly wager against Teagues’ success with a difficult transfer student, Howard bets on Teagues to get the job done. Without being preachy, Abbott Elementary highlights the importance of social-emotional learning, and how Black people model these skills daily.

And if history is told correctly, African American leaders have been modeling social-emotional learning through acts of resilience and faith since we can remember. Abbott Elementary is simply a reminder and call to action for Black people to re-engage these skills with intention.

We didn’t choose SEL, SEL chose us. Being reSELient (™) is who we are. It’s in our nature. If we consistently engage the skills, we see Teagues model in Abbott, we’ll see our communities heal, grow and we’ll be able to reclaim our children, reclaim our classrooms and reclaim our power.

For more information about Black SEL, a Social-Emotional Learning Hub for Black

People, visit blacksel.org; and click here to learn about the creator, Kristen Hopkins. 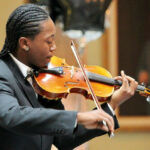